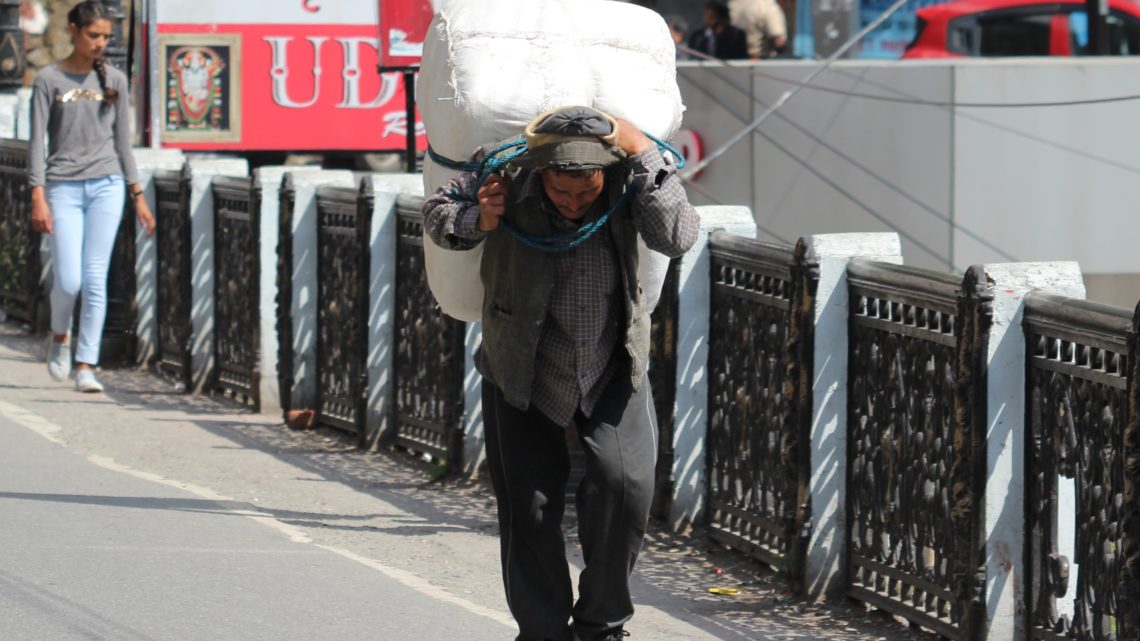 It’s our last day at the cool altitude in Mussoorie. We hesitated a little to leave in the morning for Rishikesh but the picturesque (semi) pedestrian street with its shops, the views of the nearby snow-capped peaks and the general coolness held us back.

Mussoorie is located on a “peak” and we explored the western part (Everest House), the eastern part (Landour) and the northern part (Happy Valley). To the south is the descent to Dehradun. There is the waterfall but we are not very tempted. In the same area as Everest House, we were advised Benog Tiba for his small temple at the top of a mountain.

We take a taxi to gain a few kilometers on the way. The grandpa taxi makes us an Indian entubade by dropping us several kilometers before the point we had asked him under the pretext that the road is damaged.

We walk on a track surrounded by rhododendrons.

We are wrong at the first fork (staying on the left). The right lane goes up the mountain. The left lane remains flat until a sort of camp. A dog decides to follow us as we pass through the empty camp. There is a large expanse with a few tents. The view of the valley is very beautiful. The place is remote and reminds us of some of the wild world promises that we could see when planning our trip.

A little marked path takes us through houses. We’re trying to communicate with an old lady who seems to live here. She doesn’t seem to know Benog Tiba…

The trail continues in a shaved vegetation. To our left, a dizzying view of the valley. After 15 minutes, we find a trail and then a trail. The famous track that we should have taken at the fork. We continue on the right of the track until reaching a pass between the hill of “cloud end” and Benog Tiba. We’re approaching under the rhodo.

There’s a portal in front of us. It seems to lead to the trail for Benog Tiba. We have been walking for an hour without having met anyone (which is rather exceptional in India). Suddenly, an Indian appears and of course, you have to pay 🙁 The price is significant given the attendance and interest of the area. We are trying to see if it is a real or false ranger. A trail descends into the valley to the waterfall where the access also seems to pay (enough to make a nice loop). Sorry to pay a toll to walk on a trail, we turn back.

A little earlier, we left on our left “cloud end”. Access is nice on this road half under the trees which offers a beautiful view. At the top of the hill, we discover an establishment offering group activities (marriage…). Not as cool as the name might suggest.

We decide to go home. Below George Everest House, we climb a promontory for a picnic. We are alone but the place seems to be the place of choice to finish bottles of strong alcohol. Further on, a wild dump. Non-recyclable waste management seems to be a real problem in both urban and rural areas. A trip to India is also a lot of rubbish-stained (mostly plastic) landscapes.

It is around 4pm when we take the bus to Dehradun from Palace picture. A private bus driver tries to make us believe that there are no more buses…

The descent will be epic as to go passing on very narrow roads, the engine high in the towers and the foot on the horn. Little by little we find the heat, the moist and the polluted air. We stop the bus near a bus station but no luck, no bus goes to Rishikesh. We are embarked in a collective tuk tuk (only 9 people and our huge bags) to an imprecise destination in the hellish traffic of the end of the day. It’s past 6pm when we are dropped off at the out of town. Crazy traffic before our eyes and dozens of Indians who seem to be waiting for buses, tuk tuks, collective taxis and other private cars that take people to take them a little further. There is no indication in English.

People look at us a little surprised. An English-speaking Indian comes to tell us that our bus, the last of the day, has already passed and that we have to find another means of transport to get to Rishikesh. We are a bit down as we could have chosen to arrive earlier in Dehradun to get our bus. Suddenly, he calls us insistently. It seems that a collective taxi is heading towards Rishikesh. The driver is patibular but 4 other Indians enter the vehicle with friendly air. We’re 11 in the vehicle with no one on the roof, let’s go. Between the sound of music, the engine, the horns and the steering wheel, the 2 hours of roads crushed against each other seem long.

It’s dark when we get down the crushed shoulders of the minibus. A little dumb, we are beset by tuk tuk drivers with crazy prices. We negotiate despite fatigue and nervousness.

We booked a night in Tapovan. It seems to be the top of town, tourist part. The lower part of the city seems less touristy (small street, train stations). The city is at the junction of several rivers which makes traffic difficult (for a change).

The Blue Jay Hotel welcomes us nicely and the room is nice and the bathroom clean.

The movie of our Maldives dives