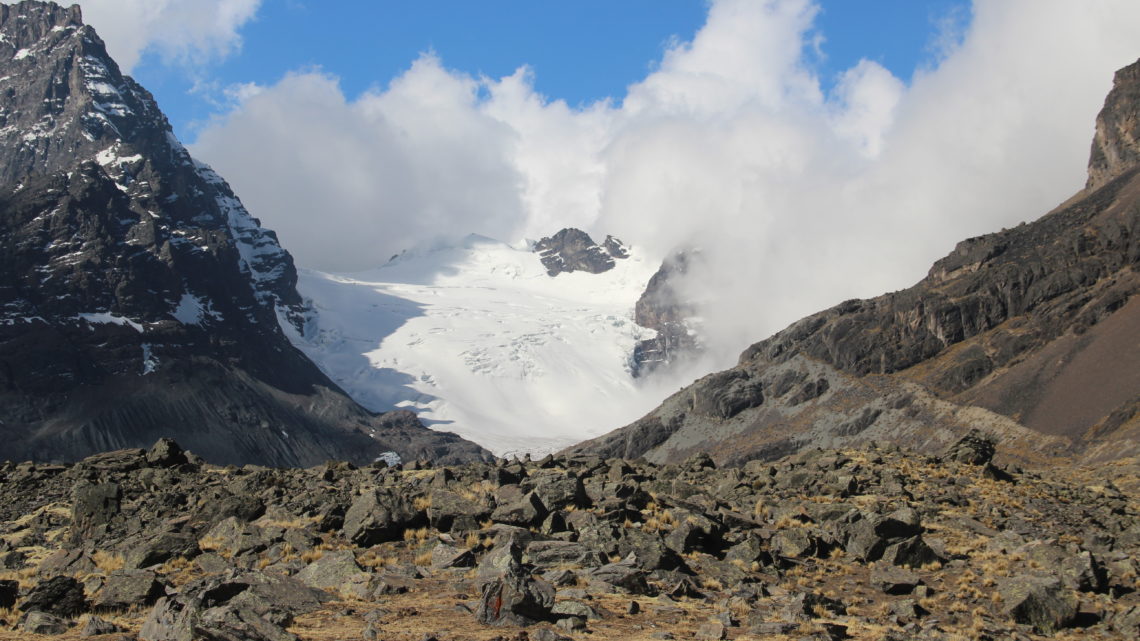 By Eric (translation François and Guillaume):

We leave the newly and cephealgic Condoriri base camp (4700m) (with a headache) to the east along a narrow slate path, towards the moraine of a glacier that is easily reached.

The ascent of Pequeno Alpamayo (5410) begins with a nocturnal approach to the ice tongue amidst the silence and the lighted eyes of the viscaches.

At the bottom of the glacier, it is the quasi-religious ceremony of the laying of the cleats and the fitting of the harness. I’m 3rd in rope behind François for a laborious climb behind Hillarion, a sharp and quiet guide as it should be. Guillaume rides with Marcello. We cross snow bridges to the Tajira (5250m) with slopes of 45 degrees. On icy edges, cleats are your friends. Coke is starting to flak.

The first light of day appears when we are at the top of the Tajira. To reach the Pequeno Alpamayo, we unscalad the Tajira without leaving our peaks to reach a pass 100m below.

I exchange my place of rope with Guillaume to join Marcello.

I think the first ridge is more than 50 degrees because I can plant my ice axe along the length.

The arrival at the top is a relief. I had feared that the descent of the Tajira would undermine the confidence and spirit of William and Francis, but from the top of the first ridge, in the thick mist, I see their coarse silhouettes as well as the rope of Ariel and Alex.

To see them climb and culminate at the top like penitents, exhausted and ahannant (very breathless following an intense effort) forced my admiration and confirmed their stubbornness.

Less than 30 minutes later with near-zero visibility, Marcello explains to me summarily but gently the course of the descent, i.e., direct.

Finally, the ascent of the Tajira proved less cruel than expected and allowed me to breathe although Marcello felt that it was a greater effort than the search for balance along the previous ridges.

We attack the snowfields whose narrative and trace were not bucolic. We were at the top at 9:30 a.m. and down the glacier around 10:30 a.m.

The weather was forecast until 1 p.m. In fact, during the ascent of the glacier, lightning illuminated the contours of the mountains. Arriving at the first pass around 7 a.m., a thick mist settled on the peaks. Winds and snows didn’t leave us for the rest.

After descending from the Tajira, the ascent of the ridge was particularly challenging due to the altitude, the slope and the lack of pace in the progression. Fortunately, Eric and Marcello’s encouragement took us to the top.

Going down from Pequeno Alpamayo and then up the Tajira was long and exhausting. Every 5-10 steps, we stopped to recover a semblance of our strength deep within us. The rest on the glacier was simpler with the gradual decrease in altitude. We found Eric and Marcello at the bottom of the glacier, worried, an hour after their arrival. Then Mary, delighted to see us appear under bad weather in the refuge.

Eugenia’s soup marks the end of this ascent that will be remembered.

Then we go back to La Paz